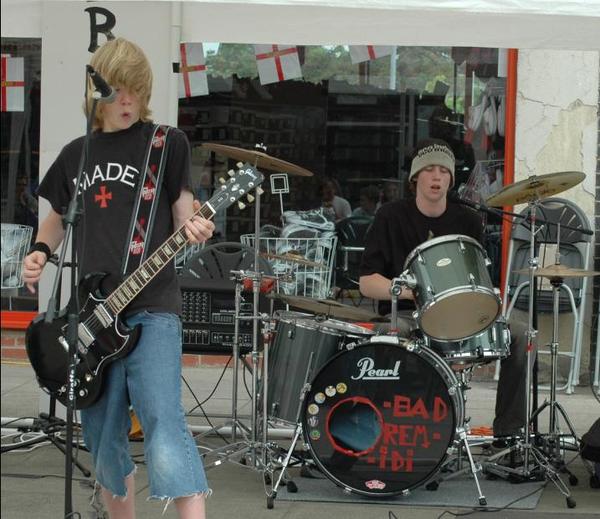 The 100 daily challenges have started and this post marks day 1. If you haven’t been keeping up to date with posts recently then go back and check out what is going on, in brief I am completing a challenge a day for 100 days. Each challenge is doable within a 24 hour period and then, having completed the challenge, I am going to blog about it.

The list of challenges can be found in the website menu but today’s post, and kicking off the 100 days is challenge number 77: To tell a story I’ve never told anyone before. So without further diversion, here it is, an untold story from my life.

McFly.
It was October 2006 and I was just coming up to my 15th birthday. At the time, I had a somewhat questionable haircut and I was just discovering that as a human being I was able to have an identity through fashion and hairstyle. Endless collections of Total Guitar, Kerrang! and various copies of Metal Hammer were where I drew most of my inspiration from, however my Mum’s only rule to me having long hair was that it must be cut out of my eyes in case it ruined my vision. This lead to a hilarious looking mullet style do. I don’t regret anything I did in my youth, I was a teenager and learning the ropes of life but if I was to advise my younger self then I would have said to maybe sort the hair out.

Anyhow, enough about my locks and fashion sense and more about the story. In October 2006, my Mum had found an advert in a copy of one of the music magazines that I collected saying that Universal Records were holding auditions from 15 – 25 year olds in London, looking to put together a band. At the time I was fully obsessed with playing guitar and song writing, I’d often wake up early before school so that I could squeeze in 45 minutes of playing before I had to get the bus. A bit like exercise now, I would struggle to go a day without playing guitar for at least part of the day. Being so dedicated, my Mum decided that I should audition for this band with Universal and see what happened.

A few weeks later, I found myself in Covent Garden’s Pineapple Studios in front of a management team and some Universal Record’s reps. I played 30 seconds of a song I’d written that was about the confusion of growing up, still to this day I think it might be one of the best songs I’ve ever written. There were to be 3 days of auditions and there must have been over 100 people there on the day I did mine, though the panel of industry people had given each other solid looks when I played my song so I didn’t feel discouraged.

A couple of days later I received a call from a man called Richard Rashman, he said that he was interested in me as a songwriter and musician and invited me come back to London to explain a bit more about myself to him and his management team. After a quick (probably a bit slower back then compared to now) google search, we found that Richard Rashman was responsible for the bands Busted and McFly, both bands at the time were big names and playing arena tours. Now, as you can imagine, 15 year old me suddenly was filled with ambition and excitement, despite the tarnish media that both the pop bands were receiving particularly in the rock world, I suddenly envisioned me getting to leave school early and being in an arena selling band. My parents quickly noticed my imagination running away with me and sat me down for some parental advice. We agreed that I shouldn’t mention too much to friends and family as if nothing was to come of it, then I’d look a bit of a fool, so we agreed to keep it secret.

Over the next few weeks, my hair felt longer, my clothing got more outrageous, I put a sweatband on both wrists and donned my converse to school (much to the disapproval of the middle management staff). It didn’t matter to me, in a couple of months I was going to be a rockstar and school would be a far distant memory. I kept my lips shut about the whole thing to any friends or teachers, but that didn’t stop me from dreaming away at lunch break hypothetically playing out how everyone would talk to each other after I’d left for stardom, arguing over who’d known me best now that I was part of the famous alumni to come out of the school (although, I think the most famous person to come out of my school so far is Ewan Thomas – an olympic triple jumper? maybe?).

I arrived one weekend in the Royal International Hotel in London to meet with Richard Rashman and his crew. They’d invited myself and 2 others to play through some songs we’d written and discuss a new project they were thinking of building. We sat in a hotel room and the stories of how Busted and McFly had come to be were told. 15 year old me, dressed in my best attempt at Billie Joe/American Idiot era black shirt and red tie with a studded belt was sat there dreaming away at this idea that I was going to be in the next McFly. Typical of industry folk, they made it sound like a dream. McFly had moved into a house together, been schooled from the tour bus and were living that ‘rock and roll’ lifestyle. I was fully aware that it wasn’t quite the punk rock grind that the bands I admired had endured but I didn’t care, at 15 all I wanted was to get out of school and make the popular kids jealous.

We left that meet up with high hopes. Not much had been said. in terms of the future of this new McFly style project but it seemed as though Richard and his crew were interested. However, a few weeks passed with not much contact, an email here and there about any artist development and songwriting tips from one of Richard’s team but not a whole lot else. Weeks turned to months and suddenly I felt a little worried. I’d been swagging around school, determined that year 10 was to be my last year at school and that GCSE’s would be on the bottom of my to-do list the following year as I’d be touring the world in McFly 2.0. After about 5/6 months, I asked my parents what they thought and we agreed that perhaps I should call Richard and find out what was happening.

Now, I’m not a great fan of talking on the phone and was particularly bad at it when I was a pubescent teenager full of insecurities and anxiety. Nevertheless, I called Richard on his personal mobile number that he’d given me at the meet up. The phone call went straight to answer phone and I was too frightened to leave a message. About 15 minutes after this initial call, I tried again and alas, no answer. I tried one last time after another 15 minutes but again, no answer and there was no way my phone anxiety’s could hold up to leaving a voicemail.

About an hour or so later, the phone rang and I answered with a slight desperation. On the other end was a panic stricken Richard who yelled “YOU CALLED ME THREE TIMES?!”, to which I replied “err, yes, err, hello. It’s Benedict here.” “WHO!?” belted Rashman, “WHY DID YOU CALL ME?”, he sounded annoyed. “I just wondered if the project was still going ahead?” I replied (or something along these lines).
He clearly ran over some thoughts as there was a slight awkward silence, “the project’s over, there’s no money in the UK’s music industry anymore, I’ve moved to LA to work with the Jonas Brothers, please don’t call me again on my personal number.”

I didn’t say a whole lot to my parents, I didn’t even mention that I called him. My dreams of leaving school early and being in the next pop boyband with guitar sensation were over. Maybe that’s when the journey to being in a DIY punk band truly began.

There you go, anyway. Nobody has ever been told that story and now it’s out in the world. 1 out of 100 challenges complete.

Tomorrow, will be another.