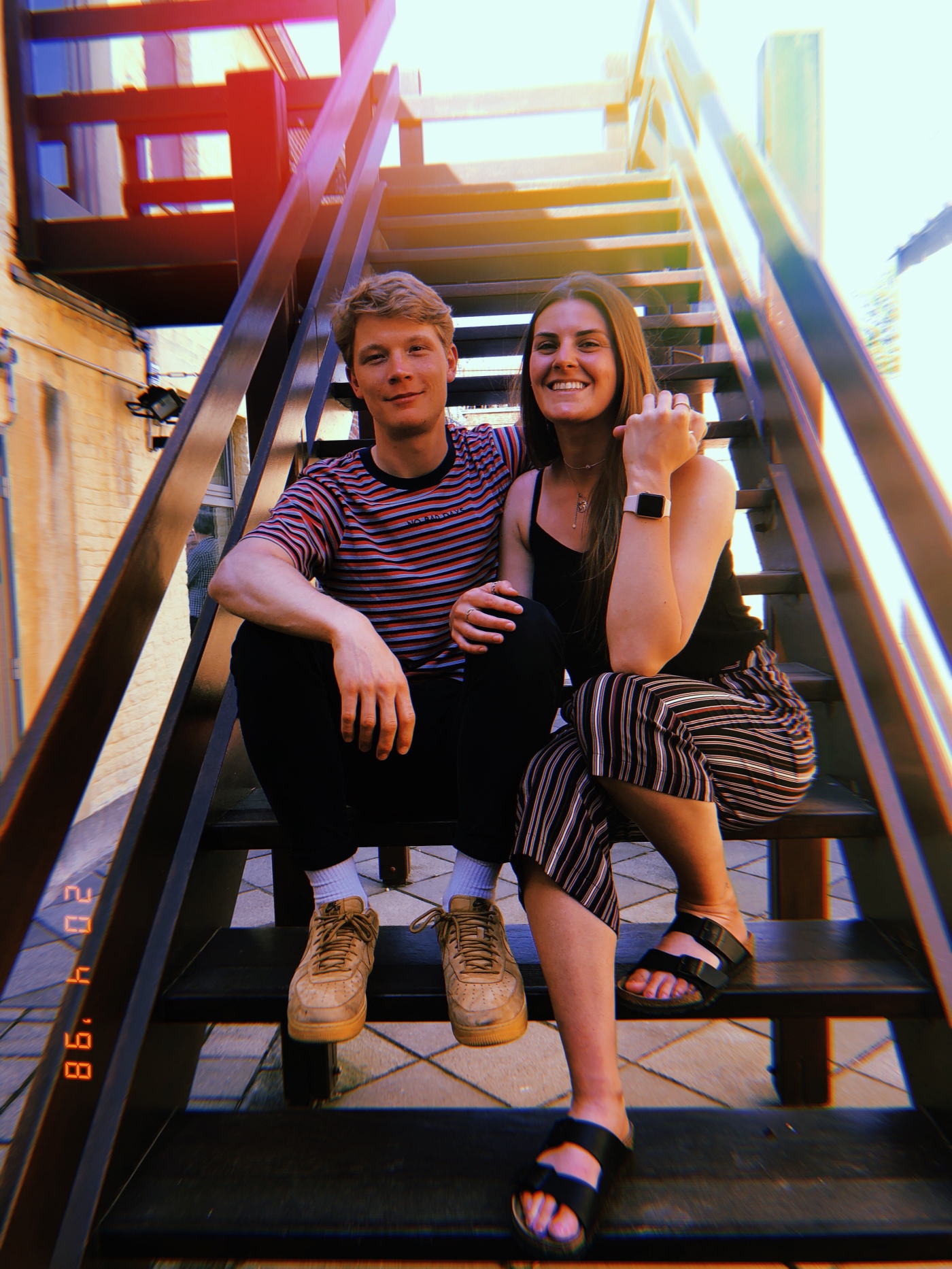 “The problem with time is, whilst everything changes, everything stays the same…”. That quote is written in Matt Haig’s ‘How to Stop Time’, which by the way is an incredible read that I highly recommend. I love the quote because it’s so true. In a human lifetime we see changes of vast expansion but we also see the same things day in day out that never change and haven’t changed for years and years.

Exactly a year ago today, I wrote a post called “10 Goals to accomplish in 1 year” so today I am writing the re-cap. Tomorrow, I will write my new goal list for this year. Now, there are goals on the list that I ticked off and then some, there are a few that I came close to and there are one or two that didn’t happen that I plan on carrying over to this year.

Before I deep dive into it all, I just want to highlight on how much has changed in the past year but also how much is still the same. This is something I’m sure everyone can relate to and I’m sure will be the same for every year of life.

10 GOALS I SET ONE YEAR AGO TODAY:

1. To have put more art/songs/creative work online.
Now this is something that I felt very strongly towards this time last year. As a creative there is nothing more frustrating that realising that, despite the time and effort you’re putting into your work, nobody is hearing or seeing it. Austin Kleon’s book “Show Your Work” is the epitome of why you should just put work out there regardless of if you don’t feel it is perfect or ready for the world. This year I put a fair few videos on YouTube and I wrote a fair few posts on this blog. I would say I’m happy with the level at which I took on the challenge but I do feel that I perhaps could be putting slightly more online. My new goal for the coming year is to put creative work online but via this site and not worrying about social media outlets, including YouTube.

2. To run a sub-3 hour marathon.
YES! I did it. 28th April 2019 in the beautiful city of Stratford-Upon-Avon, I ran the Shakespeare Marathon in a time of 02:55:09. Not only did I accomplish the goal of sub-3 hour marathon, but I also ran a qualifying time for the London Marathon ‘Good-For-Age’ entry in which I was successful. So this coming year I get to run the iconic London Marathon. Like many runners this is a bucket list run so I plan to put my all into the training and I’m going to aim for a sub 2:50. Good times.

3.  To have a bigger social media presence.
This makes me laugh. This time last year I was frustrated at how little presence I had online as I was caught up in the fog like most people. The fog being the dark blanket of social media and the obsessive idea that more is better. I guess this sort of tied into the first goal as I wanted more people to recognise my work. Over the past year, I’ve realised that I don’t actually mind how many people my work reaches and I’m more bothered about my work and writing being something I enjoy and do for the sheer release. I also have come to loathe social media and now view it as a time wasting, advert addictive, mind numbing area built for consumerism at its worst. This year my goal will be to go on social media as little as possible. Since July 1st, I’ve been on Instagram twice, YouTube for nothing but work purposes and I haven’t even logged onto Twitter. I went on Facebook to post that I’d got into the London Marathon but even that felt dirty. This goal has definitely flipped on its head and I’m better off for it.

4. To have moved out.
Well, this has just about happened. Laura and I move to a flat a week on Tuesday. Yesterday we hurried excitedly through Ikea to pick up bits. It’s awesome and I’m so elated that we’re actually going to have our own place. I guess if the goal list had been writen for 1 year and a week or so then this would have had a nice tick next to it. The funniest story behind this goal is that our whole year has been a bit of a rollercoaster in terms of moving house and moving out. At one point we were home owners, with a mortgage set up and a survey conducted when the sellers pulled out at the last minute. The sheer relief was extraordinary as both Laura and I realised that the entire time we were in no position to buy a house as neither of us see ourselves settling here long term. Funny how things work out.

5. To have a successful online business.
Wow, okay. So this is a good goal. Now this is one of the goals on the list that I guess didn’t formulate and I didn’t even really make an attempt for it to happen. This is definitely still a goal, it has been for a very long time. Now, I guess what I would like to do this year is to start an online business but I also would like to make this business non-selfish. I want to start it and run it for the sheer fun and challenge of operating an online business. In terms of it generating a profit or making money, I’d prefer that if it was to that the money went towards helping people or providing for others. This is where I plan on starting with this business idea. What can I do, that is predominantly done online, to help other people and or provide for those who perhaps do not have? Hmm…

6. To have travelled to a new country.
Yes! Another big fat tick. Laura and I spent a few days in December 2018 in Estonia. A country neither of us had ever been to. What a place too! Oh my god, we talk about those magic 4 days all the time. It was one of those trips that just happened and we hadn’t put much thought into going. When we got there we suddenly realised we were in a winter wonderland Christmas paradise. The magical and mystical vibe of the old town ran through us and made for a trip that we will remember forever. Of course, this is a goal that forever continues, as a budding traveller I wish to travel to as many countries as possible.

7. To have returned to Africa.
Africa is another place that, whilst there, I felt a magic and a connection that I have yet to come by anywhere else. We did not get the opportunity to go to Africa this year. A mixture of timing and funds meant that we were unable to go. Now, don’t get me wrong, the travels and adventures we had instead were equally incredible and brought education that I would not have gotten anywhere else. However, Laura has never been to Africa and I want to take her. This year we have some big travel plans and Africa is right up there on the list. I really hope we do this in the next 365 days.

8. To have made an attempt at learning something new.
Another tick on the list. This year I have learned and now regularly practice Yoga. It sort of crept out of nowhere and has become something that I have fallen in love with. My passion for Yoga is starting to become to a level that only running has ever reached. I currently go 3-4 times per week to Hot Pod Yoga. I must admit I love the heat too and when I practice without the heat I definitely miss it. My favourite thing to do at this moment in time is to go to Hot Pod Yoga after work, have the coldest of showers immediately after and what comes next is a feeling that I can only imagine is similar to that of taking Ecstacy.  I feel absolutely incredible and all my senses get heightened. It’s magic and I plan on doing it every Tuesday and Friday for the next year and then some.

9. To do something for charity.
Again, this is something that I wish I had put a bit more effort into. This year, through work and life, have obviously contributed towards charity. I recently donated a lot of my wardrobe to a charity shop as part of a life cleanse and taking much more of a minimalist approach to the material goods I own. However, when I set this goal, I meant it to be on a much larger and more purposeful scale. My problem is that obvious charitable actions such as “Run a Marathon for Charity” wouldn’t work as I’m much less likely to generate funds for running a marathon as it’s something I do anyway. This year I’m going to take action and put some more thought into this. I work with a visual impaired learner and I have been inspired to undertake some charity work for the RNIB so I plan on pursuing this further. Watch this space.

10. To run 100 miles in one week.
Okay, I’m going to do this. I feel like at this point I should have probably clocked 100 miles in 7 days but yet my record still stands at somewhere in the 80 mile range. I have planned to do this on 16th – 23rd October and the wheels are in motion. I’m excited and I will be sure to document the whole week on this blog.

So there you go. Exactly one year ago today I sat on my parents kitchen table writing this list and today I am sat on my girlfriend’s kitchen table writing how far I’ve come. How much has changed… oh quite a bit, but how much is still the same… a large amount. Tomorrow I will write my new set of goals so that in exactly a year tomorrow I can write sat at whoever’s table I might be perched upon. Hopefully my own.

One thought on “10 Goals to accomplish: 1 year later.”